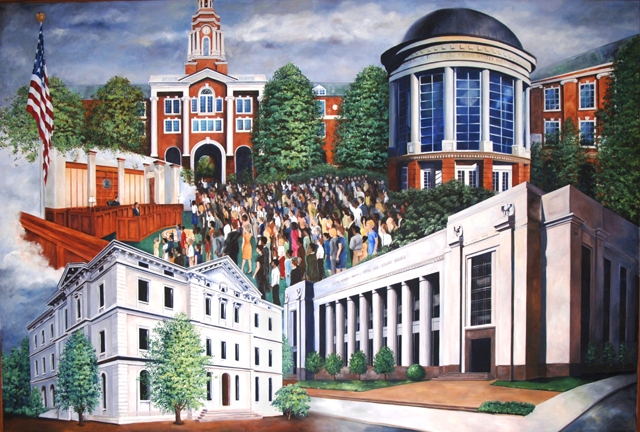 The mural of the federal courthouses in Knoxville TN, is done in oil on a wall of the 4th floor of the Howard H. Baker Federal Building. Located at 8oo Market St., the "Howard Baker Courthouse" is the old Whittle Building, originally built by Chris Whittle of Whittle Communications.

The mural is centered in the grand hall of the 4th floor where the US Federal East TN District judges hold court. Included on the lower left is the old "Custom's House" used as post office and fed. court, now the East TN Historical Society.

On the lower right is the old US Federal Courthouse and Post Office used from the early 30's until the 90's when court was moved to the Current site shown at the top of the mural. In the center of the composition is a depiction of a US Naturalization Ceremony using the current grand fed. court room and morphed into the courtyard space of the Howard Baker Courthouse.

© Copyright 2021 - All images and content are the properties of their respective owners.